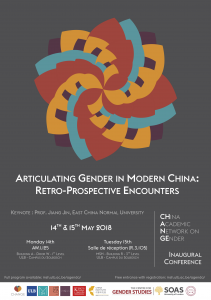 The inaugural conference of the China Academic Network on Gender (CHANGE) will be held at the Université libre de Bruxelles (ULB, Belgium) on May 14-15th 2018. The event is conceived both as the network official public launch and as its first scientific manifestation. Titled Articulating Gender in Modern China : Retro-Prospective Encounters, the conference will bring together in conversation established scholars and early career researchers from the humanities and social sciences whose research focuses on gender issues in modern China. As a starting point for future collaborations undertaken within the network, its roundtable and research workshops will seek to uncover the main challenges, practices and methods of gender research in China to outline a state of the field we aim to promote. The network will also organise biannual themed conferences at partner universities starting in 2019.